“And the rose like a nymph to the bath addressed,
Which unveiled the depth of her glowing breast,
‘Till, fold after fold, to the fainting air
The soul of her beauty and love lay bare.”
Percy Bysshe Shelley (1792-1822)

Mellerstain House near Gordon in the Scottish Borders is a beautiful setting for a lovely collection of roses. The house was built in two stages. The two wings were built in 1725 to designs by William Robert Adam. The large central block was built between 1770 and 1778 to designs by his famous son, Robert.

Extensive grounds with a lake and many fine trees stand at 600 feet above sea level. The gardens command a glorious view across to the Cheviot Hills. The lake is home to swans, Canada geese and other wildfowl.

The original 18th century garden was built to a contemporary formal design. It was laid out with the lake in the form of a Dutch canal surrounded by raised grass walks on which stood classical statues. These have now gone. The lychen covered, formal balustraded terraced garden with parterres, now full of fragrant heritage roses, was laid out in 1909 to designs by Sir Reginald Blomfield (also designer of Godinton House gardens in Kent) in the delightful architectural style of that period. In 1987 the property was transferred to a charitable trust by the 13th Earl of Haddington, a descendant of the original builder of the house. 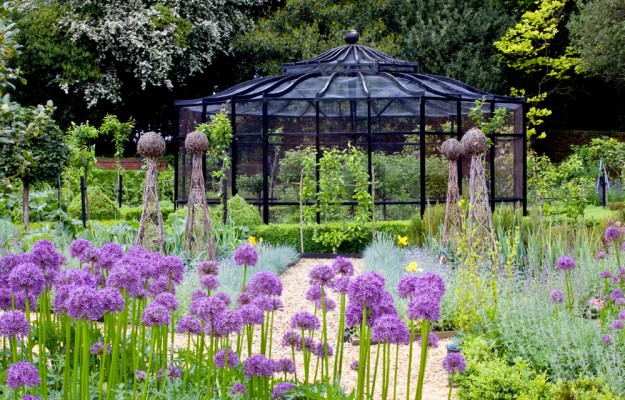