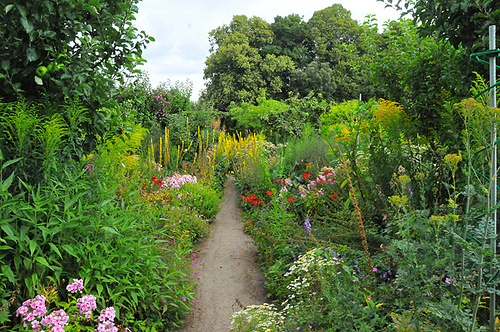 Mark how the yellow iris wearily
Leans back its throat, as though it would be kissed
By its false chamberer, the dragon-fly,
Who, like a blue vein on a girl’s white wrist,
Sleeps on that snowy primrose of the night,
Which ‘gins to flush with crimson shame, and die beneath the light.
The Garden of Eros. Oscar Wilde (1854-1900)

Abbey House Gardens is a remarkable garden in Wiltshire, created since 1998 by Ian and Barbara Pollard. Their passion and enthusiasm are reflected in the elaborate design and planting schemes. The unique 5 acre setting around a late Tudor stone house, beside the Benedictine abbey in Malmsbury, is dramatic. Malmsbury was a weaving centre until the 18th century. Athelstan, Saxon King of All England, was buried here over a 1,000 years ago where the Normans later built the abbey. St Aldhelm, the first Abbot of Malmsbury, sang, preached and converted here. In the 12th century the ‘Father of English History’, William of Malmsbury, was librarian of the abbey.

Thousands of roses cling to walls, scramble through trees, bound over fences and weave through borders. An enormous herb garden encircled by an arcade has been built in the ‘medieval’ style with raised beds as described in a 9th century poem ‘Hortulus’ by the Benedictine abbot, theologian and poet Walafrid Strabo. A pond with a fountain forms the central feature, enclosed by a colonnaded structure which is home to vines, fruit cordons, roses and clematis. The oak lattice work has been pegged and hand tied (over 4,000 knots), just as the monks would have done. There are nearly 2,000 herbal plants here, all of beneficial use to man in a culinary, medicinal or aromatic way and a magnet for bees and butterflies. There is a generously proportioned laburnum tunnel and many other triumphs.

A Celtic cross knot garden represents the fact that Malmsbury Abbey was founded by a Celt from Iona in the 7th century. The patterns on St Martin’s cross have been recreated in wall germander, cotton lavender and box, which are traditional knot garden plants. The date of its planting – 2000 AD is clearly marked at one end and a border added in a Celtic ‘S’ shape which means ‘Everlasting’ – going forever forward but looking forever back – rather like this garden!

There are huge herbaceous borders in riotous colours, water features, a river and woodland walk (with kingfishers and water voles if you are lucky), rhododendrons, and a bog garden with an occasional display of meconopsis in spring.